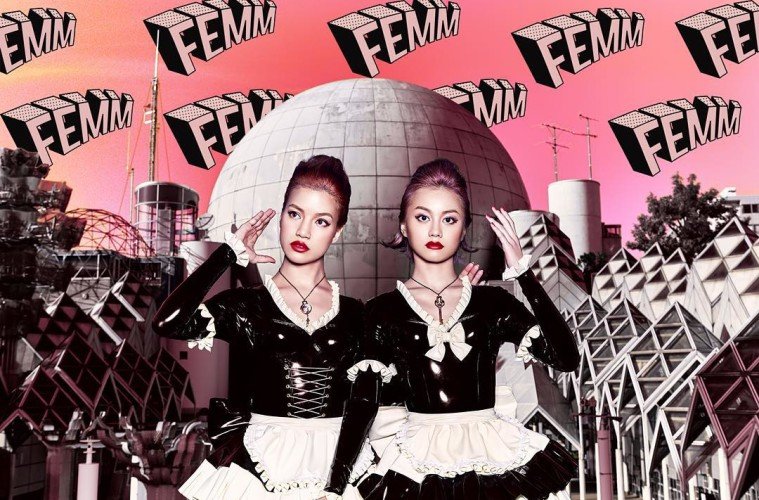 Hi, guys. This is the first post of 2016 and I thought I’d start off with something not makeup and beauty related. Let’s just get on with it, shall we?

That’s a good question. FEMM is short for Far East Mention Mannequins. They are an electro-pop musical duo from Tokyo, Japan, with a message to spread. They are mostly known for their unique concept, electronic sound and English-heavy lyrics.

It will take more than just that paragraph to grasp the uniqueness of these two girls, or “mannequins”. Debuting around 2013 (before officially making their debut in 2014) through a teaser on YouTube, it was made clear that RiRi and LuLa, the two mannequins, had a purpose and a message to spread – to move people with their music.

FEMM are portrayed as plastic dolls or mannequins. Their faces and features are distinguishable and they both look distinctly different; however, they do maintain uniformity in how they dress and their, erm, attributes – be it military, pilot, maids. RiRi and LuLa are the two mannequins that are out to free all the mannequins from human oppression. They do not talk or communicate and this is where their agents come into existence. Honey-B and W-Trouble are RiRi and LuLa’s respective “agents” and they act as the voices of the mannequins.

Now, don’t get confused. W-Trouble is LuLa and Honey-B is RiRi. Okay, you’re most definitely confused. If you investigate further, you’ll learn that while they might biologically be the same person, they are most certainly not portrayed that way.

Take a look at their music video, ‘Astroboy’. You might just get the gist of it! The two girls at the 00:17 mark with visibly more fluid movements are the “agents”.

FEMM’s mannequins/agents are actually portrayed by Hiro Todo and Emily Kaiho. Hiro Todo was a solo singer before taking on the concept of LuLa/Agent W-Trouble while model and actress Emily Kaiho has comfortably slipped into her role as RiRi/Honey-B.

The electro-pop, dance-pop sound that they have worked into their songs and have almost perfected is upbeat, fun and generic. While their songs cannot be played throughout the day, I would highly recommend you to play them when you start your day. Look, I’m no morning person and it takes five alarms to get my butt to college every morning. FEMM’s strangely uplifting lyrics and sound will get your through the endless morning tasks in a jiffy.

I’ve come to like most of their songs by now. It’s ingrained into my brain and everytime I feel blue, I usually turn to them to make things better. The first song I listened to them was ‘Kill The DJ’ and I stumbled upon it by pure chance.

For starters, its their dedication to their concept. If you look up videos, you’ll learn that the girls stay in character through fan meetings and shows alike, often being carried on and off stage by staff members.

Second, their concept itself is unique. The doll/mannequin concept is a fun take at the pre-existing idea of idols and their very calculated moves.

FEMM can’t really be classified as J-Pop. They hardly ever sing in Japanese. The lyrics of their songs are in English and this is a clear indication of their target audience – the world, not Japan alone.

Again, they’ve explored feminism, girl power and freedom of speech in their lyrics. Their song, ‘Fxxk Boys, Get Money’ is the epitome of their empowered lyrics, if anything.

Their music videos are often a treat. Even with minimal and robotic movements, FEMM delivers a punch with highly synchronised and clean videos.

“AM I WEIRD FOR LIKING FEMM?”:

FEMM is no different than any other idol group out their, yet, somehow, they’re incredibly different from the rest.

Let’s take K-Pop act VIXX into account. Even they have concepts for every comeback they make and they structure the whole aesthetic, choreography and the song itself to fit under the concept.

FEMM is similar. It’s just that they stick to one concept instead of switching and experimenting with dozens of different concepts.

FEMM is all set to release their major debut EP on February 3, 2016.  It will include two new songs, ‘PoW!’ and ‘LCS’ along with remixes and remixes of their older songs.

I just made this post as an excuse to write about their latest offering, PoW! and its music video. The music video was released on the first day of the new year.

I loved the song and the music video. There were real people in it, haha.

RiRi and LuLa looked stunning in the video with doll-like makeup to match their maid outfits and pink tops. The flawlessness and, again, the doll-like skin that we can clearly see in the video makes me want to hunt down their makeup artists and request a similar look or maybe a makeup tutorial with a rundown on whichever products were used.

I hope they keep providing us with great songs and keep exceeding their limitations. And I definitely hope they prove their critics ‘Dead Wrong’.

I’ll be back soon with some beauty titbits. Until then, take care. ♥